John Upton was born in the early 1600’s in or very near Scotland. He was likely one of the prisoners taken by Oliver Cromwell at either the battle of Dunbar on September 3, 1650 or at the battle of Worcester in 1651. Cromwell later sent John Upton and other prisoners to New England. His name on the prisoner list may be listed as John Rupton. According to Upton family tradition he was sold (indentured) upon his arrival in Massachusetts to a woman who lived in what is now West Peabody near the Upton Tavern. It is said that several of the early fruit trees on the Upton farm were brought over from England by her. John obtained his freedom and became a man of means and property. He was a blacksmith and is associated with the early Saugus Iron Works.

John’s Scottish wife, Eleanor Stuart was said to be an adherent of the royal house of Stuart. Family tradition suggests that Eleanor Stuart seems to have anticipated Upton’s coming to New England, and was here upon his arrival, where they married. Their first child, John III was born in this territory in 1654.

The Upton family has a lengthy history in North Reading and West Peabody. John Upton purchased upwards of 200 acres of land in Salem (now West Peabody) from 1658 through 1671. The first parcel of 70 acres was purchased from Henry Bullock in 1658. It is recorded on this transaction that John Upton was "sometime of Hammersmith".  Hammersmith was the name given to the Saugus Iron Works. Two years later, in 1660, Upton built a dwelling house on the site of the present homestead on Lowell Street. Upton purchased 80 acres from Daniel Rumball in 1662 and another 70 acres in 1671 from James Hagg.

It was around 1678 that John Upton moved from his 200 acre farm in the area now known as Upton’s Hill. His sons, William and Samuel Upton continued on the farm in West Peabody with the dwelling house on Lowell Street near Birch Street. The West Peabody dwelling became known as the Upton Tavern. A noted feature of the house is the large kitchen fireplace with a hearth measuring 8 ½ feet in length and projected into the room 5 ½ feet. This homestead was used as a tavern before 1774 by Ezra Upton and continued by his son, Jesse, until his death in 1825. The tavern farm remained in the Upton family until 1837, when David Upton sold it to Daniel P. King and Daniel Brown.

Around 1680, John Upton is listed among the first six families located in the territory now constituting North Reading. Our Peabody source reports that in 1676 John Upton bought a large acreage in North Reading and built a house there around 1678. Eaton’s History shares that he lived on the farm that was occupied in 1874 by Mrs. Sylvester F. Haywood. In 2016 The Hayward Farm area runs along Route 62 near the Thompson Country Club. This area is close to the Ipswich River near West Peabody. He became a “freeman” of the colony just a few years before his death in North Reading in 1691. 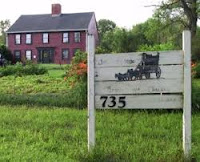 Genealogical History of the Town of Reading, Mass: Including the present towns of Wakefield, Reading and North Reading from 1639 to 1874 by the Honorable Lilley Eaton 1874.
https://archive.org/details/genealogicalhist00eatoiala

The Peabody Story: Events in Peabody’s History 1626-1972 by John A. Wells 1972
https://books.google.com/books/about/The_Peabody_story.html?id=eMUMAAAAYAAJ

The Upton Memorial: A Genealogical Record of the Descendants of John Upton of North Reading,MA  by John Adams Vinton 1874

Posted by North Reading, Massachusetts History at 8:48 AM

The following was written by Andy Dabilis, and published © in the Boston Globe, November 12, 1995: “NORTH READING, JULY 18, 1942 -- It was about 3:20 p.m. on a foggy Saturday afternoon during the World War II years when 16-year-old Leonard (Gig) Stephens heard through the cold mist the sound of an aircraft in trouble near his home by the Red Hill Country Club, not far from Route 62, and he ran outside to see a B-17 Flying Fortress bomber on a descent to death. He will never forget, he says, the sight of an airman standing in an open hatchway as the plane started to clip the tops of pine trees into a wooded area, too low for a parachute to work. The engines were spitting flames. The plane cut a path 200 feet long and 40 feet wide, leaving behind one of its giant wings in the back yard of J...”
( I am working to retrieve the entire article and locate more information.)

Details of the incident can be found at the Aviation Safety Network:
https://aviation-safety.net/wikibase/wiki.php?id=97310 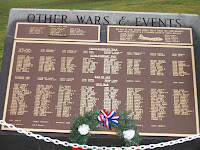 If you are interested in more Massachusetts aviation history, please visit the Massachusetts Aviation Historical Society website. I am currently the archivist for their collection. (2015-2016)
http://massaerohistory.org

“Several early settlers of Redding came to Massachusetts at the time of Gov. Winthrop’s arrival and a few were here years before; Richard Walker, Redding’s first representative, was in Salem with Gov. Endicott in 1629; Peter Palfrey, whose homestead during his last years was near Crystal Lake, was with Roger Conant in Gloucester and Salem from 1624 to 1629; John Poole, the town-miller, was one of the eight men who with Lieut. Gov. Dudley began the settlement of Cambridge in 1631. Redding, therefore, may justly claim to be one of the pioneer towns of the Commonwealth.” p.1

“In 1639, nine years after the arrival of Gov. Winthrop with the charter of the Massachusetts Bay Colony, settlements were begun in Lynn Village near the shore of Lake Quannapowitt. At that time there were only seventeen towns in the Colony and they had only recently been given the right to elect officers, pass by-laws and give title to land within their borders.” p.1

Remember, in 1651, the Court granted to the inhabitants of Redding, two square miles north of the Ipswich River that became the Second Parish – now North Reading. Remember also, North Reading, North Parish and Second Parish are names for the same location. ”In 1658, the land north of the River was divided among the forty-five inhabitants of Redding, few of whom settled in the North Parish but sold their land to settlers who came from Salem and Danvers. The Town of Redding later gave one-half of Sadler’s Neck, south of the River, to six proprietors of the Second Parish.” p.3

Howard, Loea Parker. Ancient Redding in Massachusetts Bay Colony; its planting as a Puritan village and sketches of its early settlers from 1639 to 1652. (1944). Internet Archive

How to Preserve Children

Mix children and dogs well together and put them in the field, stirring constantly.

Pour the brook over the small pebbles and sprinkle the field with flowers.

Spread a deep blue sky over all and bake in a hot sun.

When thoroughly browned, remove and set to cool in the bathtub.

Eudora Lucas Hailmann was an early childhood education innovator. She and her husband, William, introduced kindergarten models to American school systems. She was also the first president of the National Education Association. She prepared and published a valuable collection of kindergarten songs and games. She also developed kindergarten equipment that included sand tables and group tables. Eudora was born in 1835 and lived in Louisville, Kentucky. She died March 9, 1905 and is buried in Riverside Cemetery, North Reading. Her sculpted headstone flanks a commemorative plaque for her husband, William Nicholas Hailmann.

William married Eudora on December 24, 1875. After attending Medical College in Louisville, Kentucky and receiving a PH.D from Ohio University in 1885, William taught high school natural science. From 1865 to 1873 he directed the German and English Academy where it is noted that he and Eudora built the first kindergarten classroom in the United States.

William also served as superintendent of the Indian School Service in 1894, and worked to hire more Native American teachers to teach Indian children. Working with Theodore Roosevelt, he developed an exam which ensured applicants for teaching jobs on reservations were aware of the unique hardships of American Indians. This process helped create more employment of Native American teachers. Eudora worked alongside her husband in all his efforts. William was born in Glarus, Switzerland in 1836 and died in Pasadena, CA, May 13, 1920. After Eudora’s death, he married Helena Kuhn of Detroit.

For a photo of the gravesite in Riverside Cemetery, North Reading, visit the following link at Find a Grave:

Click the "Internet Archive: Early Land Grants and Town Bounds" link below to find land records of the town of Reading 1639-1802: “A True Transcript from the Town’s Old Books made in 1853 by W. J. Wightman, Town Clerk”:

Also laid out were town and county highways, footpaths & a grist mill. It includes information about (Reading’s) Bear Meadow, Pine Swamp Lands and land down to the (Saugus) iron works.

Thank you to Reading Public Library, the book contributor and digitizing sponsor and to Internet Archive. Internet Archive, a 501(c)(3) non-profit, was founded to build an Internet library. Its purposes include offering permanent access for researchers, historians, scholars, people with disabilities, and the general public to historical collections that exist in digital format.
Posted by North Reading, Massachusetts History at 12:22 PM

Jared B. McLane & His Wagon Factory

The average number of workmen at the McLane factory was about fifty. He employed cabinet makers, blacksmiths, sign painters and carpenters. The output of the factory included a full line of commercial wagons, sleds and parts for replacement and repairs.

Jared Brown McLane was born in Pugwash, Nova Scotia on May 8, 1853 to Alexander and Harriett (Brown) McLane. When he was young he apprenticed with a carriage maker and blacksmith to learn the wagon-maker’s trade. At nineteen he left Nova Scoria and moved to Topsfield, Massachusetts where he worked for D. E. Hurd, wagon and carriage builders. In time he became a partner of Mr. Hurd, which lasted several years. They were contemporizes of my great grandfather, C. Fred Jordan, a prominent Topsfield blacksmith.

About 1873 he sold his interest and came to North Reading and started a blacksmith shop in the rear of the present Flint Memorial Library. Eventually he purchased an adjacent building and began building wagons. One of his first wagons was purchased by the town as a patrol wagon and was used by Constable Henry Dane.

Mr. McLane’s well constructed, lettered and varnished wagons were used by police departments in many surrounding cities and towns. In 1902 he produced an illustrated catalog showing several types of wagons: “Market, Store, Express, Milk, Meat, Ice and laundry” as well as “Carts, Caravans, and Pungs built by our design or your specifications”.

Mr. McLane was very active in town affairs. When the North Reading Board of Fire Engineers (the early fire department) was organized in 1895, Mr. McLane was a charter member and was appointed as engineer, responsible for the care and maintenance of all the firefighting equipment. He was also a member of the committee for the erection of the new LD. Batchelder School building. He held the chairmanship of the town finance committee, and was a member of the Good Fellowship Club.

Mr. McLane became a director of the First National Bank of Reading. In 1914 he was elected to the General Court of Massachusetts, representing the towns of North Reading, Reading, Woburn, Wilmington, and Burlington.

Mr. McLane married Alice M. Long of Topsfield on September 16, 1875. She was the daughter of Henry and Catherine (Perley) Long. Henry was of North Andover, Massachusetts and Catherine was of Boxford, Massachusetts. Mr. McLane died in Pinehurst, North Carolina, March 27, 1917 and funeral services were held at the Union Congregational Church in North Reading. Following his death the J.B McLane Wagon Factory became the North Reading Wagon Factory. The factory was destroyed by fire in February 1928.

The Jared B. McLane house still stands at 148 Park Street, North Reading. It was built in the federal style in 1818 by Ebenezer Damon on land purchased by Dr. Jacob Goodwin. Three years later it became the home of Reverend Cyrus Pierce the third pastor of the Congregational Church. In 1828 the property was purchased by Dr. David A. Grosvenor and in 1876 conveyed to Jared B. McLane.